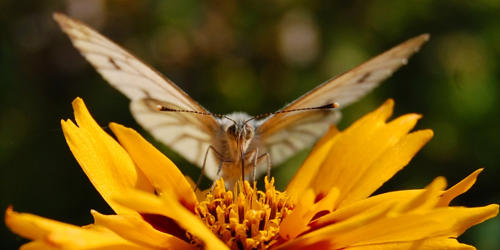 As programmers we rarely have a luxury to write a project from scratch. Usually we have to retrofit existing projects with all cool things we need. If a new component, or a library we want to use introduces new concepts that bleed outside its boundary, we have a “culture clash”, when old code is unaware about new concepts have to work with it anyhow. Sometimes the clash is so bad that we have to give up on using shiny new things, or have to significantly rework their code, which requires time and efforts we cannot afford.

This situation calls for elaborate translation facilities between “old” and “new” worlds, or our new component/library should be aware of the problem, and provide necessary hooks, and utilities to adapt for existing projects.

heya-unify was designed from the ground up to support such paradigm. We already saw in heya-unify: custom unification how to unify our custom objects, or modify a unification of existing objects. This post deals with results of unification by cleaning them from unification variables, so they can be used in parts, which are not aware of how those results were produced.

Looking at the 1st, 2nd, 3rd, and 4th parts of the series is recommended before diving into details.

Usually we use unify() to leverage unification variables, which means that our results can contain variables (essentially object references). Usually by that time all variables are bound, yet our code may not be aware of their existence. How to deal with it?

A related consideration: in most cases we don’t need pure variables, but some object structures may contain them. Frequently we use patterns to parse objects, and hold parsed values in variables, and other patterns to create new objects from parsed objects.

But we want to transform it to something like that:

It is easy to write an input pattern:

But what now? How can we assemble and pass the results, so our plain JavaScript code can deal with it, without going into details of unification artifacts, like variables?

We can clone an object containing variables providing that it doesn’t have circular references. While cloning all variables will be resolved and replaced with their values. This is a non-destructive operation, which keeps an original result object intact.

Despite its internal knowledge of variables, clone() can be used on any type of objects.

As you can see our code is purely declarative and simple to understand: we described our input and output as JavaScript literals, then called unify(), then conditionally called clone().

Both clone procedures of registry and filter functions of filters are called with two arguments: a value to be inspected/cloned, and a context object. The most important parts of the context are two arrays used as stacks: stack and stackOut. The former is used to accept more values to be cloned, while the latter is used to keep already cloned values.

Remember that preprocess() doesn’t know how to handle cloning of custom objects, yet we can easily add this functionality to clone(). In the example we will reuse Unifier and Person described in heya-unify: custom unification:

A frequent operation is to dereference unification variables substituting them with their values. This way we don’t need to “explain” to our code how to handle them. While we may go over an object graph, while modifying it, the less invasive procedure is to clone parts that contain variables. In this case all objects without variables in them are used unmodified, which makes the whole process faster, and easier on memory.

assemble() is a cousin of clone(), which clones conservatively. Only branches with variables in them will be cloned, and modified leaving the original result object unchanged. If a source object does not have any variables in it, it will be left as is.

assemble() accepts the same parameters as clone(). Virtually it can be used as a drop-in replacement for it. It is a non-destructive operation, which keeps an original object intact.

Obviously, if we have absolutely no other use for results, we can replace variables destructively in place. While it is fast, and conserves memory, it cannot be applied to object with circular references, and may affect any bound unification variables defined in the current environment. Not only that, it will eliminate all variables from a pattern as well making it non-reusable. Do not use deref() with static patterns!

deref() belongs to the same group as assemble(), and clone(). It accepts the same parameters as clone(). Virtually it can be used as a drop-in replacement for it, but beware of side effects!

This function is a simple templating facility, which can embed unification variable values by name in a string. It is especially useful for debugging, or when a legacy code expects strings rather than objects.

heya-unify provides a set of utilities to interface with plain JavaScript code, which is not aware of unification concepts. It makes it a viable solution for retrofitting legacy projects.

This is the last post in the series, which presents heya-unify library.

All installments will be posted in this list as soon as they go online: